The Monster Under the Bed
By bestselling paranormal author Gare Allen 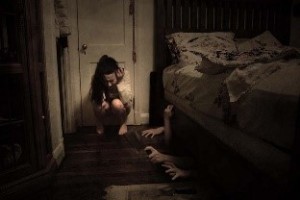 I was twelve years old when my bed levitated itself.
It was close to ten o’clock on a school night when I decided to go to sleep and was immediately joined by the family dog, Patches.

As usual, she found a spot at the foot of the bed and curled into a ball.
My bedroom was located at the top of the mauve, shag carpeted stairs.
Mine was the first bedroom at the beginning of a hallway that led to all the other sleep rooms.
I’ve never fallen asleep quickly, so I was wide awake a few minutes later when the bed suddenly elevated a few inches off the floor.
While suspended in mid-air, it wobbled slightly. I froze in terror, and the next few seconds felt more like minutes. Feelings of severe angst and confusion consumed me. It was similar to when you fly in a plane or take a ride on a roller coaster. It was a helpless sensation, but there weren’t any safety mechanisms in place, and this wasn’t a carnival ride. I could see Patches lift her head, prompted by the elevated and unstable motion.
After hovering for two to three seconds, the bed dropped hard and fast, back down to the floor. Patches jumped up and yelped a short, startled cry. My limbs shifted on their own, which provided me proof of my recent movement. Desperate to understand the obvious infraction of physics law, my mind frantically searched for a rational explanation. Simultaneously, I worked to hold back a panic attack by taking in deep breaths and slowly exhaling.
As if on cue, my older brother appeared in my open doorway. Having just walked up the stairs on his way to his bedroom, he stopped and asked, “What was that noise?”
Unable to collect my thoughts and formulate a response, while still trying to regulate my breathing, I simply looked at him. I imagined that my eyes were wide open. I must have had a mixture of confusion, disbelief and fright expressed on my face.
Growing up, I think most big brothers find their younger siblings strange and mostly uninteresting. I’m confident his perception was no exception. A look of wide-eyed terror would simply be another “weird little brother” moment and hardly worth the effort of investigation. He flashed me an eye roll, and then disappeared down the hallway. In hindsight, it was doubtful that he would have believed that the thud he heard as he climbed the stairs was actually my bed landing on the floor.
In shock, I remained motionless for another few minutes until the majority of my panic subsided and I finally found the courage to move. I sat up and looked around my small room.
The silence was eerie as I scanned the room for anything out of the ordinary. The closet door was open, and nothing but a filing cabinet and shoes looked back at me. Continuing my investigation, I confirmed that the window remained shut and was locked. That left just one obvious place to look: under the bed.
I leaned over the side of the mattress and allowed my head to hang down so that my view of the small space between the bed frame and the floor was upside down.
The light coming in from the open door provided just enough illumination to see through the dark space. I ran my hand along the carpet. It was cold. One more swipe of my extended arm resulted in my fingertips brushing against a soft piece of fabric. Assuming it was the match to one of my many, lonely socks, I pulled it out from underneath the bed.
I’ve always had a thing for, what I now refer to as, classic rock: The Beatles, The Who, The Rolling Stones, The Monkees, etc.
A close second musical favorite was heavy metal, in particular, AC/DC, Black Sabbath and Ozzy Osbourne.
Previously, my parents had reluctantly purchased an Ozzy tapestry and fulfilled my Christmas gift request. The tapestry was nothing more than a large handkerchief, adorned with images of Ozzy and his album covers. I would later see them at fairs and carnivals and understand that they were homemade, silkscreened products.
I held the square piece of fabric with both hands and sat up on the edge of my bed. My eyes inspected the tapestry as if I was going to see something on it that I hadn’t before. The hallway light streaming through the door was no longer sufficient for my intense scrutiny, so I stood up, took a few steps toward the switch and flipped on the light. The instant illumination filled the room and I gasped at the edges of the kerchief. Each corner displayed an identical tack hole. Remembering that it had been hanging on my pre-teen wall, adjacent to soccer and football posters, I looked at the area above my bed.
Kids have the luxury of still believing in magic, Santa and in my case, a consistent, winning Tampa Bay Buccaneers team. Perhaps it was this naivety that kept me from sprinting from the room, as I stared at the four tacks on the wall that once held up the tapestry.
Nope, there weren’t any tears in the corners of the handkerchief. It clearly hadn’t been pulled down and I couldn’t determine how it found its way off of my wall with the tacks remaining in place, only to be discovered beneath my bed.
After pulling the thumb tacks from the wall, I hung my Ozzy “artwork” back in place. My careful placement utilized the same tack holes in a concerted effort to deter the inevitable rants of my father regarding the insurmountable damage that tacks and push-pins inflict on wood paneling.
Later, in early adulthood as I studied metaphysics, I would recall the specific images on the kerchief. Hazy and, most likely, unlicensed pictures of Ozzy in concert that were undoubtedly taken from magazines, adorned the corners, with random upside-down crosses filling the outer ring. The center boasted a large star that I would later understand to be a pentagram.

For those wondering, the juxtaposition of a satanic bandana as a Christmas present is not lost on me.
“The Monster Under the Bed” is Chapter One in The Dead: A True Paranormal Story by Gare Allen 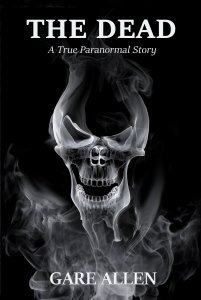